Some properties are very vulnerable to exploitation to the point it needs some extensive work done. The property owner called our technicians with a concern that multiple animals were entering. The reason why this is exceptional is because of the amount of work needed for the property.

If you have squirrels breaching your property, make sure to call qualified and insured wildlife control experts from Wildlife Removal Guelph

Upon hearing this, a wildlife control technician was dispatched to the area to do an exterior inspection. The exterior inspection is the most important part of the wildlife exclusion process because it allows the technician to understand the situation in depth and to take note of any additional points that will need extra attention.

The technician, in this case, went up to roof level and carefully inspected the property. They concluded that the following was found. According to the technician, 3 entry points were found. Two in the back of the house and one in the front.

Due to the damage, it became clear that the animal in question was a squirrel. These entry points were found around the dormers of the house at the roof level. There were also large parts of exposed areas found that needed to be covered as well. Furthermore, additional coverage was needed to prevent animals from taking advantage.

Since it was clear that these 3 entry points were caused by squirrels, One-Way Doors needed to be mounted on at least two of the areas with one being sealed so that the squirrel will pass one of the two one-way doors.

One in the back and one in the front of the house. A One-Way Door forces the animal out without doing it any harm or trapping the squirrel. Once the animal is out of the property, it cannot go back in due to the door swinging just one way open. It takes about a few days to a few weeks for the squirrel to leave the area. The technician will then return, inspect again, remove the door, and seal it.

It concerned 4 exterior wall vents that were covered with steel mesh vents. 6 roof vent covers to prevent animals from coming into the attic and doing interior damage.

Plumbing vent covers were also attached by the technician. In total 4 of them were attached and secured so that no animal will be able to enter the interior of the building.

A few days later, as mentioned earlier, the technician revisits the property, takes the door down, and seals the entry point with steel mesh that withstand the fiercest attacks and that protects the property for good.

This case was a classic example of how exposed our properties can be when they are not properly maintained. Animals will take advantage of every type of hole, gap, or crack, no matter how narrow they look to us, animals like squirrels will always find a way to get inside these areas. In the end, 2 One-Way Doors were installed, 10 ft of areas were covered and reinforced, 4 exterior wall vent covers were installed, and 6 roof vent covers and 4 plumbing vent covers were installed. The property owner did not report any animals coming inside anymore after our visit and the case was successfully closed. Need help with squirrels? Call us at 226-789-0749. 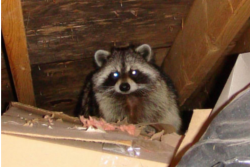 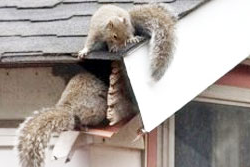 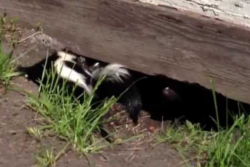 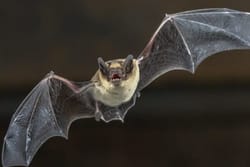